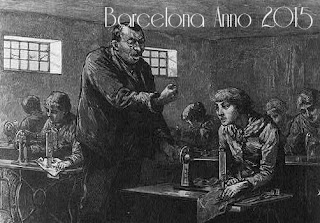 Working in Barcelona still has a ring of the good life about it for foreigners, and company’s promote the beachside lifestyle for all that it is worth. The ads don’t tell you the real story; that for most people working in Barcelona means a pay check so thin you can use it to slice open the can of soup you’ll have for dinner five days a week, you’ll encounter 19th century style management and a monotonous work situation with no real prospects.
So, how did it come to this?
It is about the money
It is rather sad that Barcelona is a place where you come to leave your (professional) dreams behind, not to fulfill them. I recall talking to an American friend as she was leaving Barcelona to go back to the States. She had left an executive job with a comfortable salary to live for substantially less in Barcelona, but being here to enjoy the lifestyle that the city offers more than compensated for the pay cut. Now, however, it had become too hard to hold on as expenses kept accelerating and income stalled or even slipped down.


This was about five-six years ago, and the situation has hardly improved since then.
Unemployment is skyrocketing and It doesn’t help the country being under the rule of the most incompetent and corrupt government in the democratic history of Spain, whose only response to the crisis is to cut pensions,  unemployment compensation and wages and raise costs for education etc. while ensuring it is business as usual for the corrupt politicians and bankers. Finally, the corruption charges have piled up high enough to “bury” the government as they, in June 2018, had to vacate the offices to be replaced by a socialist (PSOE) led government.
It is not all about the money
For people in the Northern part of Europe the impression is that the Spanish work life is all about the siesta, conveniently overlooking that the amount of hours put in are not any fewer than in Scandinavia or Germany. I would argue that systemic inefficiency and lack of incentives are key issues. Old-fashioned hierarchies dominate here. The management level in Spain receives a markedly higher percentage of salary payments of the European Union average.
Hierarchy
In many companies in Spain there exists a mouldy, old-fashioned hierarchy with a clearly marked demarcations between employees and management levels. Often these hierarchies are rigged such that the person at the level above always takes the credit.
Many managers (high and low level) seem to confuse fear with respect whereas the two could not be further apart! I actually know of one company where the support department is run after the fashion that when the service is up to scratch, middle management lets someone go to show their superiors how efficient they run the shop. Way to keep the staff inspired!
Fear is a lock on creativity and efficiency whereas respect is a door opener for loyalty, dedication and consistency.
The less distance between levels, the faster ideas travel and they arrive at a higher momentum, and easy just to implement with a “nudge.” Levelling out the corporate structure and getting rid of middle management, that in many cases only function is to act as bottlenecks for creativity and productiveness, would be an excellent start.
The “shrugged shoulder policy”
What the failure of management leads to is a “shrugged shoulder policy”: why do a decent job if there are no incentives to? This is why calling any kind of support, dealing with plumbers, the postal service etc. is always such a hassle. So, your Wifi doesn’t work, your toilet is overflowing, the car.tires you ordered never arrived. What are you met with? The shrugged shoulder. Furthermore, if taking a decision is more risky than not to, much better to shift the responsibility to the co-worker, your superior or to the customer.
I have no doubt about the ingenuity and the willingness to excel among the Barcelonins, but a government that has been destroying social structures for years, and outdated attitudes towards leadership and organization will spur on an exodus of young talent with higher ambitions for their work-life, and quell the influx of young talent from abroad. At which point, the managers of these outdated institutions can close shop and head for the beach.