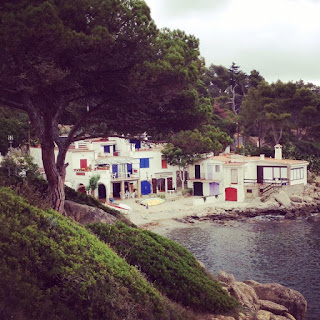 As a newcomer to Barcelona, or even as a frequent visitor it is easy to miss some of the treats that make the city and the region of Catalonia so special. Our recommendation is simple, go explore Catalonia!

It is truly a shame if the only beaches you park your backside on are the city beaches in Barceloneta.

It is too bad if you do not get to experience the calm of sitting down for a meal of fresh seafood in a small town on the Costa Brava coast.

You’ll absolutely regret it if you never see what splendor the forests and mountains of Catalunya can reveal.

South of Barcelona you encounter small towns with large beaches like Gavá and Castelldefels, a short train ride down from Barcelona. Venture a little further and you’ll find a couple of cities that merit a day’s outing.

This is a lively, and lovely, city that hosts an annual film festival that is gaining renown as well as a gay pride parade that is the focus of a week-long party that attracts people from around the world. Attractive city beaches and an intense nightlife are also enough to convince many to pay Sitges a visit.

The city is home to the most complete Roman Forum outside of Rome. The city itself makes for an interesting visit. The (for Catalan cities) “mandatory” Old Town is certainly inviting for those addicted to roaming city streets. Decent shopping can be done  here as well!

For many, the first encounter with the region is the Girona airport. And, it would be a shame to miss the city! It is a must to visit the charming Old Town with its centre piece, the cathedral. The cathedral has been made famous by the Game of Thrones’ chapter with Cersei’s “walk of shame”.  The building is, however, much more than “ prop” for a popular TV-series. In fact, it might be the most impressive example of the “Catalan gothic” architecture around. Combine this with a walk along the old city walls to take in the city from on up high.

A small town that was founded in the 11th century, located 30 kilometers from Girona, with a stunning medieval architecture and a famous Romanesque bridge with a unique structure. Like time traveling.

The Northern coastline is where you go for beautiful beaches and a stunning, rocky landscape. Hence, the name “costa brava”, which roughly translated into “the wild (or rugged) coast.” The best way to get around is by rental car as only the very northern part, by the French border, is covered by train service. If you don’t mind spending a little time on the road, there are bus routes from Barcelona to the main towns as well.

Palamós – A small, former fishing village (like most places along this coast) with a small, charming beach area and pristine, clear water.

Cadaqués – A beautiful village with white-washed small houses, which is rather inaccessible, situated as it is between big slabs of rocks (mountain) that your vehicle needs to navigate. The adjacent Port Lligat is the birthplace of Catalonia’s great painter, Salvador Dalí. The house where he lived until he left as a young man to conquer Spain and then the world with his surreal paintings can be visited by pre-booking a tour.

Figueres – Talking Catalonia’s favourite son, Dalí, the city of Figures biggest claim to fame is the Dalí Musum – naturally just as whimsy and surreal as you’d expect. Certainly worth a visit!

Naturally, it’s easy to miss a few of the gems that Barcelona hides within its many backstreets as well! For those with special interests (architecture, wine, gastronomy), in particular, it’s worth considering booking a specific tour with an experienced guide to make sure you don’t miss something that would be a highlight on the trip!

If you need an extra hand when planning activities in the city, especially when traveling in a group, we’d like to recommend barcelonatours.net. They are Barcelona specialists with an outstanding reputation for excellent service. The site has tours that cover basically any thinkable special interest as well as specializing in tailor-made tours and planning for corporate groups.