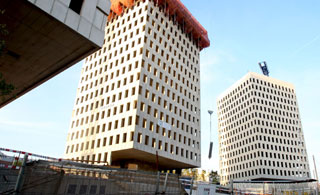 Cubics, Santa Coloma
This hotel/apartment/entertainment centre project really is one of the most misplaced architectural projects in the greater Barcelona. The entrance to the cinema looks like a parking entrance with an inclination steep enough to preventing those with weaker legs from ever leaving the premises. The buildings are completely “dead” with the appearance of lego pieces dropped by some gargantuan child from above.

The height naturally adds to the whole “out of placedness” of the buildings, though this height combined with the “cutting” of the nether section of the structure does allow for an efficient use of space. Unfortunately the total impression is hostile and enclosed. Two characteristics that neither the hotel, the movie complex nor the apartment building should “wish” to transmit!

The architect responsible for Cubics, Eduardo Souto de Moura, has, in 2011, won what is arguably the most prestigious architectural price there is: The Pritzker. Cubics is the perfect example of an architect getting lost in conceptualizing and not really considering surroundings and practice. Forms that look great on the (3D) drawing board sometimes fail miserably to communicate with the real life landscape. According to chairman of the Pritzker jury, Lord Palumbo, de Moura’s buildings possess a unique ability to transmit apparently incompatible characteristics… (trans. from Spanish).

Indeed, in the case of Cubics there is a lot of transmitting of incompatible characteristics, but of characteristics that, in my mind, are irretrievably incompatible! The sheer scale of the buildings impede communication with any form in the area. In any case I feel there is always grounds for caution when someone is referred to as an architect’s architect as in the case of Moura. It is akin to that of being a musician’s musician, it could be a great thing (Nick Drake) or a not so great thing (Steely Dan)!